These brownies were very enjoyable, although their plentitude was due to a mistake in measurements. 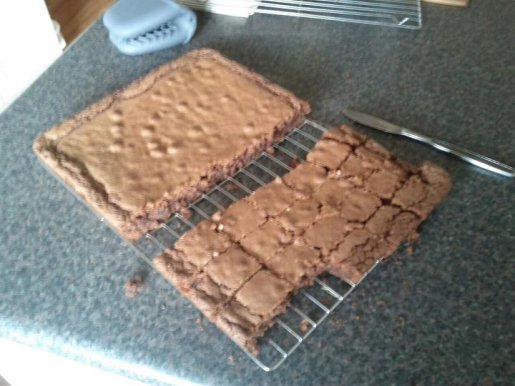 10th of October, 2011.
The recipe called for half a cup of plain white flour. Before this, though, I had only baked cakes, and every recipe I had cooked from previously had called for two cups of flour. I absent-mindedly started towards sifting in two whole cups of flour.
Upon realisation of my mistake, I managed to cut the flouring off at about a cup and a half of flour, but the damage was done. I had no choice but to make another lot of the liquid segment of the recipe, so as to balance out the overabundance of flour.
This worked out well. The tray I was going to use was about twice the size it should have been for the original recipe anyway, and I was able to give half of the brownies to a friend.
The brownies were appreciated all round, leading me to cook them again in the future.